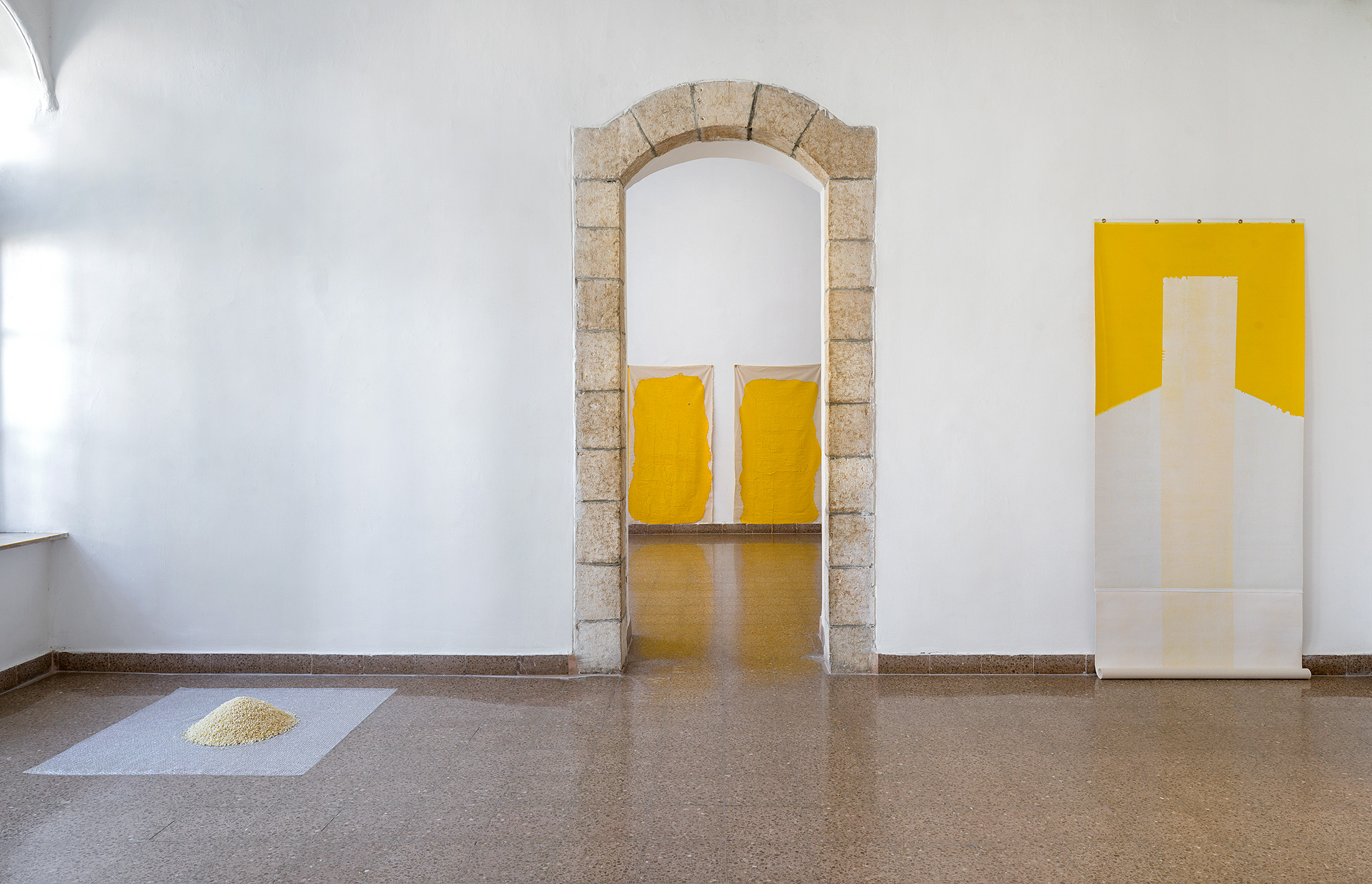 In this feature, Roni Packer shares her journey to find her yellow, and how that search is also a search for belonging and home. Roni’s solo show – A Regular Quadrilateral is on view at the Jerusalem Artists’ House through December 11th, 2021.

Yellow is not the color of the sun. Yellow is mine.

Staring at the small yellow squares, I promised myself that I would not care about color anymore. Yet, digging into them the only thing that I saw was that they were not yellow; not the right yellow. Not my yellow.

In March 2018, as part of my solo show “Yellow is Mine (Not My Yellow)” at Chicago Artist Coalition, I presented a yellow rug-like floor piece made of 100 kilos of overbaked mini croutons (shkedei-marak).

When the show ended I kept the shkedei-marak in boxes in my Chicago attic. With time they lost some of their color and faded. The three different yellow shades ( the ochre ones from the Israeli factory, the brownish overbaked ones the Israeli factory gifted me,and the vibrant yellow ones from Jewel Osco Supermarket) still had distinct tones, but they were all muted—touched by the sun and the Midwestern cold.

Three years later, when I returned to Israel, I took the boxes with me—the Israeli shkedei-marak, like myself, were now back in their homeland, and the American shkedei marak had made Aliyah. Eventually, only 30 kg of the yellow squares that I brought with me survived the trip. Some waited patiently in the studio while the others sunbathed on my kitchen window sill, withering in the process. To them I added 100 kg of new mini croutons and constructed a new floor installation, Our Yellow is Artificial, which is part of my current show, A Regular Quadrilateral, at the Jerusalem Artists’ House.

The visitors in the Chicago show were mostly Americans and had no familiarity with the edible yellow squares. They experienced the work mainly through its formal form. As one reviewer noted, “Packer pushes the limits between painting and sculpture with things that sit between both”.

I did not find it to be a problem, quite the opposite. I too thought about this work first and foremost in terms of form and color. Yet, this encounter prompted me to think about how the shkedei-marak will be perceived in Israel, where the love for them is shared by both kids (because they are crunchy and great) and moms (because that’s how you force your kids to eat soup). If in Chicago, viewers connected the piece to something minimalistic and sublime, it is hard to believe that the Israeli audience will see something divine in these well-known yellow squares. Perhaps they will even identify the work (heaven forbid) as a form of pop art?

Well, yes. The first visitor who entered the show asked me sarcastically: “where is the chicken soup?”. I told him that I’m vegan. It seems that the new version of this piece is definitely fraught with new meanings and connections, for the viewers and myself.

But apart from the new croutons and the new interpretations, another element was added to the work when the director of the Artists’ House asked me to place the croutons on a substrate to protect the beautiful terrazzo floor of the house. This platform has become an integral part of the new work. After debating between different substrates, I decided to use bubble wrap, a material I have worked with before, which alludes to a transition between cities and countries but also to an attempt to preserve art objects and protect their monetary value. The encounter between the bubble wrap, which seeks to protect and preserve, and the shkedei-marak, which there is no point in preserving, seemed to me grotesque but at the same time vulnerable and honest. The bubbles also added another formal tier to the work, while their circles fit well with the small yellow squares and the typical organic patterns on the floor. In contrast to the gray concrete floor in the Chicago gallery, the floor and the domestic architecture of the space—which was Israel’s first public museum—has a history that is interwoven with my own history. Installing this show I realized (again) that my work is about color as it is about territory, ownership, and obsession.

Yellow is not the color of the sun. Yellow is mine.