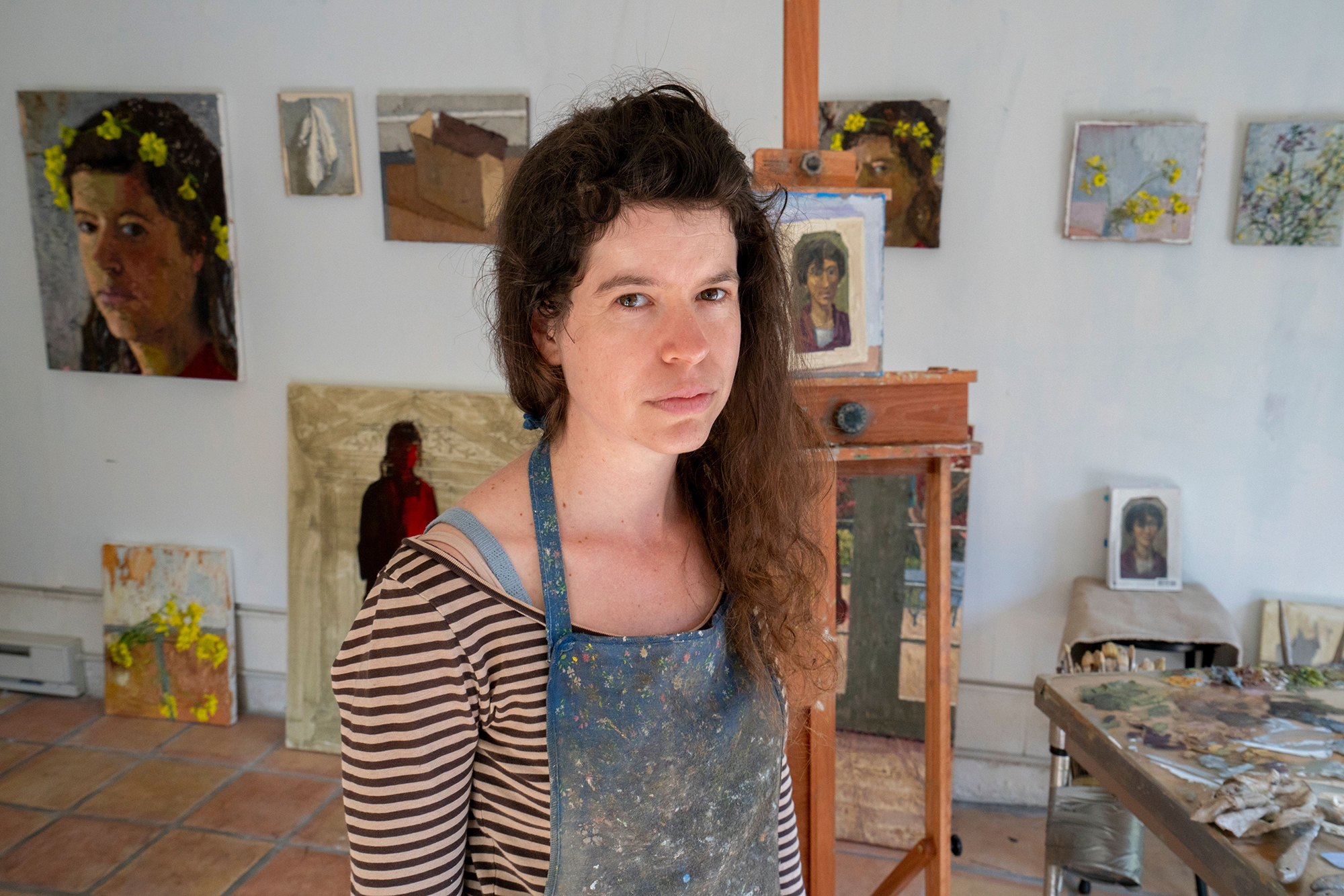 When I finished the residency it was hard to think about going back to my “real life.” I did about two years’ worth of work in three months.

Part of the reason I could do that kind of work is because usually at home, in Brooklyn, I have to juggle three things: art, family and teaching. For a few months,  I didn’t have to teach, or take other jobs. I could just focus on painting and family.

I have a clear sense of how the residency affected my work. First of all, I had the time to design my work in more structured ways. In Berkeley I was able to define my work more clearly, and track how it progressed. . One example of this is a series of flower paintings which I completed during the residency, making one painting every week, as a journal of my time there.  This allowed me to pace my time week by week, and see what I was accomplishing. I knew even at the time that I would take this idea with me back to Brooklyn, and I did use it to plan when I have less studio time. This summer, with Covid and all of the uncertainties… having this strategy gave me something clear to follow.

Another thing is the serenity I found in Berkeley. There was a focus I found here, and when I returned I decided to find a similar space in my mind. It’s a different kind of practice to do this, to keep this sense in my head. I’ve lived all of my adult life in intense cities, like Tel Aviv and New York. But the calm way of living in Berkeley captured me more than I had expected. When lockdown was really bad in New York, many who could escape did. Others fantasized. I thought about our time in Berkeley, and that was my fantasy.

Part of the reason I could find such a deep focus in Berkeley was because I had excellent child care for my son. He went to nursery school for the first time out here. And it was the first time since I gave birth that I had this kind of time to myself. Part of the openness of the residency allowed me to just…exist. I could put aside the FOMO [Fear Of Missing Out] that is so present in New York. Instead, I allowed myself to go outside in the middle of the day, to just sit on the grass and be, or take long walks in the nearby mountains. To connect to the childlike part of me that needed to just notice things. It was radical.

In terms of community and the art world here, it was very productive. Jenny’s [Gheith, a curator at SFMOMA] involvement in my work was extremely helpful. She helped me conceptualize my solo show in Tel Aviv, which was built around the body of work that I made in Berkeley.

The open studio we had at the residency was very important, since it allowed me to expose some of the works after so many hours of being by myself with them. The guests who came by had a level of interest and dedication that was special and different than what I experienced in NYC. It felt like they had more time to really see and discuss the art.

There are many influences from Berkeley that continue in my work. One is the flowers and the natural beauty. When I arrived at the residency I saw right away that a common wildflower here is the sourgrass, which is the same kind of flower we had near Jerusalem, where I grew up. When I first came I was actually a little overwhelmed by the beauty. I worried Berkeley was too pretty for my taste, for my painting taste at least. But I embraced it, and that allowed me to get to the place I am right now with my work. Brooklyn is not beautiful the way Berkeley is. And in some ways I actually prefer the trash on the ground, and the urban landscape, which I use in my work. But I found I was able to bring part of the Berkeley beauty into my Brooklyn studio, and that is working out quite well.

Another influence of Berkeley is the light — the specificity of the light in this particular place When I was in Berkeley I started to do contre-jour [a style of photography and painting which creates a strong contrast between light and dark, creating silhouettes and emphasizing lines and shapes over sharp details] paintings. I did this because of the way the light came into the studio. When I came back to Brooklyn, I dared to paint against the backdrop of whatever was outside, which I’ve never done before.

The work I was able to do in Berkeley was shown in the exhibitions I’ve had since then. These include a group exhibition at Fairleigh Dickinson University in New Jersey, and my solo show West Street, at the Neve Schechter Gallery in Tel Aviv. The core of this work, the backbone, I was able to do while in Berkeley.

I might have thought that three months wouldn’t be enough to unpack, set up and make a serious body of work. But the residency was set up so that three months turned up to be plenty of time considering the level of focus which I was able to find there. And being able to do that gave me confidence that I could travel somewhere for a shorter period and get something done.