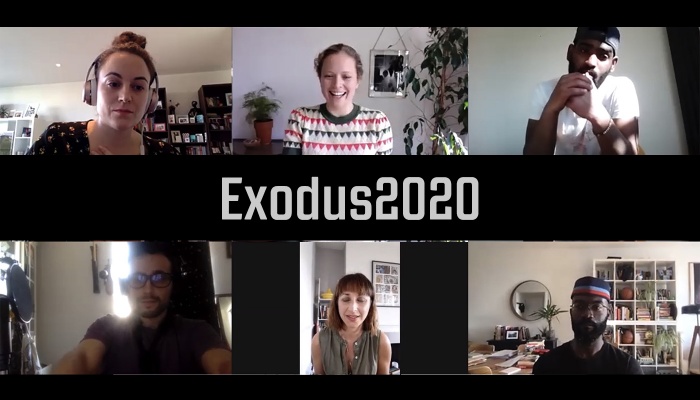 Photo Credit: Top to bottom, left to right: Rebecca Schellim, Rachel Rose Reid, Mohamed Sarrar, Daniel Gouly, Georgina Bednar, and Inua Ellams
Georgina Bednar shares her path from being a reluctant Jew to embracing this position and using it to energize her practice, the creation of her Passover events. In April 2020 she created Exodus2020 – an online Passover gathering which featured poets, musicians and workers from HIAS and ActionAid, who came together to raise awareness to the perspectives and experiences of those who are the most vulnerable in the COVID-19 crisis and rarely featured in the media  – those of refugees around the world.
Georgina received an Asylum Arts’ Digital Creativity Grant to support this project.

Georgina Bednar
I am an artist, producer, facilitator, and reluctant Jew.
Growing up, my family had a very mixed interpretation of Judaism. One side of the family was observant and so we did high holy days and Friday nights without fail. My dad, well, he wasn’t such a fan of organised religion. We ate bacon (named by the Bednars as holiday meat) and didn’t really fast on Yom Kippur. I had the choice to do a Bat Mitzvah and both my sister and I declined (my poor grandmother). I say reluctant – probably better to say confused.
For a long time, I minimised my Jewish identity for two reasons; out of respect for those around me who led ‘proper’ Jewish lives, believed in a god and attended Synagogue – things I didn’t do. And secondly, when I did, I can’t always say I felt welcome into the conversation. So, it must have seemed strange when I started getting involved in Jewish arts in my early 20’s and went on to co-run MUJU, the UK’s leading Muslim Jewish Theatre Company.
The epic story of Passover – slavery, plagues, breaking free – always stayed with me. I loved the importance of the youngest child (me, obvs) and the very adult questions we were asked over the meal, a meal with so many courses. It was exciting – what would come out of the kitchen next? Inevitably something else covered in salt. It was a performance, a ritual and a celebration of life. Of our lives.
Cut to 2015 and the refugee crisis was unfolding at lightning speed across the Middle East and Europe. Lord Dubs – a Jewish child refugee, now 87 years old – was campaigning to let children affected by war into the country into Britain. The British population said no, in so many ways. At this time I was working with Save the Children and watched as they desperately tried to influence my government to change their minds. I was also producing a show called ‘The Duke’, which raised £50,000 for global refugees. I felt moved to volunteer in Calais a few years later out of a sense of hopelessness to what we watched on the news; the story of Passover coming alive before my eyes.
That is when Andrea Tuijten– an amazing artist and educator – and I started our messed Passovers. Jewish and Non-Jewish artists would come together at our flat to experience the food, story, and peculiarities of a festival that was usually held behind closed doors. It was our way to connect to our childhoods, our stories of migration and those experiencing it, for real.
I was just starting to pull together Passover when it became clear it wasn’t going to happen. Not in my flat, not in any flat. And yet, holding a space to consider what might happen to the 67 million global refugees during this modern-day plague felt vital. I am writing this now isolated from a small, inner-city flat in London. Compared to many of my friends, my lockdown was to be a lonely one. I don’t have access to a garden, any secure income or the support of a partner. I carried on extrapolating. What if I had no savings? What if I had only one room? Or no room at all. No access to running water or health care. What if I couldn’t leave my flat to find safety? And here we are; refugee camps globally. The thought that COVID-19 would enter a refugee camp where many of these questions are truths felt urgent. During that week I also saw very few reports that focused on how refugee camps would cope if COVID-19 landed. One, maybe?
In 8 days – one day longer than it took Him to create Us – I pulled together Exodus2020. This event brought artists and aid workers together to explore how Passover connects to the modern migration crisis. We were joined by poets Rachel Rose Reid, Inua Ellams and aid workers from HIAS and ActionAid. Daniel Gouly and Mo Sarrar accompanied us with beats and questions flowed from the chat box. As with most workshops that are online, we had some technical issues and it truly was an experiment to see how 8 presenters and 60 people could connect through the airwaves.  We raised awareness and maybe some donations. We supported five artists with paid work and brought perspective. The event was not intended to minimise the dire situation faced in the West but every day I watch the news, I am still shocked at how little coverage there is of those with less of the global pie than ourselves.

Daniel Gouly and Mohamed Sarrar performing
Doing Judaism this way – through arts and dialogue with non-Jews – has always been my way. It is a type of defiance against the formal structures of Judaism that in my experience, haven’t always welcomed an honest conversation on the contradictions within any religion. This time next year? Who knows. But this is a space I will try to create, in or out, of lockdown.
Exodus2020 collaborators and line up
Inua Ellams – Poet, playwright and designer – http://www.inuaellams.com/
Rachel Rose Reid – Poet, priestess and artist – http://www.rachelrosereid.com/
Daniel Gouly – Clarinetist, educator and electronic music composer – http://www.danielgouly.com/
Mohamed Sarrar – https://www.goodchance.org.uk/mohamed-sarrar
ActionAid
ActionAid is on the frontline of the coronavirus crisis. Find out how they are helping to stop the spread and save lives as the pandemic hits the world’s poorest countries.
https://www.actionaid.org.uk/donate/emergency/coronavirus-appeal
HIAS
HIAS works around the world to protect refugees who have been forced to flee their homelands because of who they are, including ethnic, religious, and sexual minorities.
https://www.hias.org