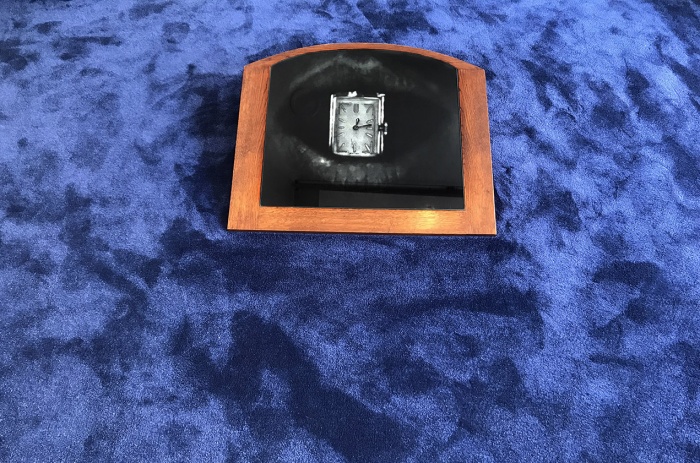 Photo Credit: 1213, 2019, oak, glass, archival pigment print, 18x61x71 cm. Photo by Maya Attoun.
Asylum alum Mia Gourvitch reflects on her most recent solo exhibition, “Fruits of the Night” which was on display at the Indie Photography Group Gallery in Tel Aviv in September 2019. Curated by Ilanit Konopny and Irit Carmon Popper.
Under the skies of Austria, I was the clock. At the foot of the Alps, I devoted myself to its gravity and felt the earth rotate in motion from light to no light.
At night there is a sense that time is stretched. As light goes down, mountains, trees, stones, the earth, the endless mountain scenery, assimilate into the darkness, clearing the stage for the celestial performance and the movement of the stars. In a room going dark after turning off the light, the chair, the table, the lamp, the bookshelves, the pictures and the walls, lose their colors and then their borders. Either way, the perpetually changing light defines the space differently as it moves, and the place becomes a scene and a main character at the same time.
Under the same skies I discovered the Summer Triangle. It is an imaginary layout of three stars that appears in August sky. Each of the stars belongs to a separate constellation: Aquila, Cygnus, and Lyra (Eagle, Swan, Harp, respectively). The triangle is connected by imaginary lines. I followed its movement, and in the motion of forms, I saw time moving.

Fruits of the Night, 2017, archival pigment print, 120×180 cm
I wandered around an abandoned castle to document its remains, its wildly growing forest, and the window view. The boundaries of the structure is nature, outwards and inwards. One might feel inside and outside simultaneously, like standing in a wild forest inside a salon of a castle’s skeleton, in a room, within a landscape. There is a peculiar feeling that you enter the outside or are exiting inside.

Schrattenberg Castle
During the hours I spent in the room, nature was my roommate. It burst into the room the same as I burst into the depth of its wildness. In front of the window stood a mountain. We stared at each other, in light and darkness, without looking away (and saw who would laugh first).
Upon my return to Tel Aviv, the natural phenomena of the area and the history of the place entered my work process and became part of the language the installation “Fruits of the Night” was based on.
The installation at Indie Gallery was built as a site-specific work which preserved the castle’s spirit, reconstructing the walking experience in it, not in a mimetic sense, but in attempt to trace the feeling that has accompanied me while walking through its ruins. The closest term to this feeling is Hypnagogia, a threshold state of consciousness which occurs in the transition from wakefulness to sleep, and is a prism through which I looked at the installation.

Photo credit: Maya Attoun
In Hypangogia, the eye is also a tool to look inwards. The gaze is covered up with a thin layer of otherness. The experience of Hypnagogic hallucinations is difficult to adapt into language. How can you visually talk about dream logic, where reality contains a certain disruption?
“Fruits of the Night” was an imaginary layout consisting of video, deep blue soft carpet, black and white monumental prints, wood and metal objects, organized in the gallery space as constellations connected by imaginary lines. The title “Fruits of the Night” depicted a realm where gates or seemingly polar concepts meet, where in fact they are interconnected by definition. To see a direction, one must also see the opposite direction. In ballet, turn left but think about the right side, in tai chi, go down but think up. Photography interests me when it comes into contact with other realms.