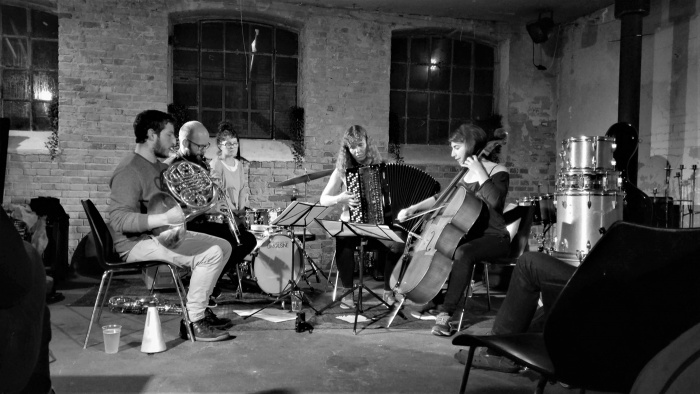 Edo Hayek, a Jerusalem based french-horn player and composer, reflects on two years living in Norway, talking about the music-video Personal Space and his recently-released album “Walk to Aspamia”.  Edo collaborated with Norwegian video-artist Tøri Gjendal to create a video work for his composition. The music for this album was written and recorded by the band Hamesh in Oslo in 2019.
I wrote the opening melody for “Personal Space” on my guitar…lying in bed one night in my twelve-square-meter studio apartment in Oslo –The snow was heavily pounding on my window as I picked up the guitar and a played a long, still melody that reminded me both of the cold Nordic atmosphere and the still desert landscape in Israel.  It had something of both.
The subject of personal relations and their connection with environment and origins was constantly on my mind during my time in Norway.  The subject of where I come from and where I am now, was both a “brick” weighing on every personal relation I built, as well as a lifting point for it. It lay underneath any experience I went through.  Both in music and life – they seemed to confluence.
Hamesh was formed in 2017, between the walls of the Norwegian Academy of Music. Forming the group, I looked for versatile musicians with something interesting to offer, a certain uniqueness and character.  Each came from a different country (Israel, Spain, Iceland, Slovakia, and Norway), play a unique instrument and came from different musical backgrounds (jazz, classical, contemporary, and folk-music).  Working together we tried to compose music in the simplest way – without huge scores and details. Only a single melody, a rhythm, some instructions and we let the rest happen in the moment. We tried, through communication, to let the voice of each musician be present.  This environment of ‘improvisation’ shows so much about personal relations.  How does one explain an idea to others? How does one adapt to changes in the atmosphere? To drama? To chaos? How does one contribute to chaos? How can we blend together in the best, most unified, most consistent way?  It’s strange how some of these questions do not have simple answers, and yet some just fall into place unspoken.
This project in many ways drew my thoughts towards the meaning of my own cultural origins.  What does Jewish folk-music mean? How does my own compositional style intersect with my musical and cultural history and knowledge? Is it naturally inherited or should it be researched? I try to direct these questions in compositions such as “Walk to Aspamia”, depicting the Hebrew concept of ‘Dreams in Aspamia’ (Spain) as an unachievable goal (or harmonic solution in this case), “Arba Babot” taking the known Niggun by Rabbi Shneur Zalman of Liadi and breaking it down into the foundations of its composition, or “Duo”, looking back from the sound of the modern French horn to the ancient sound of the shofar. In these compositions, I played with mixing elements from Jewish folk and Nordic folk, while at the same time avoiding sentiment and focusing on what’s happening now, in the moment of creation.
I have to thank my dear friends from Hamesh – the accordionist Asta Soffía þorgeirsdóttir, cellist Maria Quevedo, drummer Michaela Antalová and saxophonist Anders Abelseth, for the beautiful and rewarding collaboration which created this album.