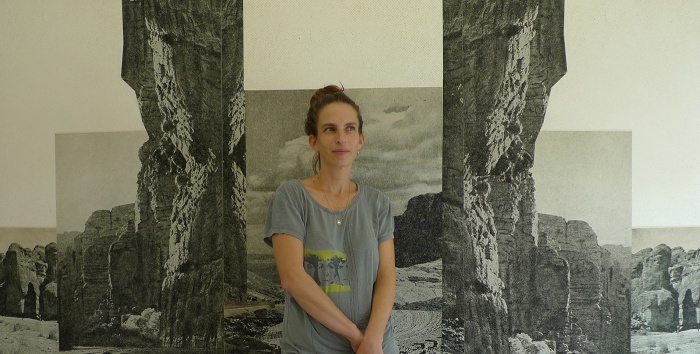 In this article, Einat Amir shares the different methods she uses to transform old encyclopedic images into new geographies that expose the connections between geology, politics, and climate change.

We often hear the argument that society must learn from nature and renew itself through this learning. Nature becomes a source of spiritual values and emotions and represents the good and the innocent. Culture begins from the point in which man transcends the conditions provided by nature. The processing of nature through agriculture and gardening is one of the cornerstones of culture.


For me, the connection between nature and culture refers to actions that delineate/formulate/create the “natural” space. These places have interested and influenced me in formulating the materials of my works, which consist of photographs, objects, and drawings from nature reserves, botanical gardens and urban nature.

Land (E) scapes is an ongoing project focusing on the landscapes of Israel and its surrounding territories. This project is inspired and influenced by an Israeli encyclopedia series called ”Michlall.” A product of mainstream Zionist culture, Michllal gained popularity with Israeli youth in the 1950s and 1960s and served as one of the main sources of knowledge about Israel and the world. The specific volume that my work is exploring is focused on Israel, it presents a timeline of the country from the 13th century B.C. through the establishment of the state and up until 1956, the year it was published.

The works in the project are based on the assumption that there are only two sources of information: the encyclopedic volume itself and the local landscape – as reflected in my view. The encyclopedic content was written and edited in another era, in the days when borders, climate and geography were different and the animals that still roamed the earth did so in landscapes that have gone through many processes. It brings information to the young reader from an all-encompassing perspective, striving for scientific objectivity. Curiosity as an almost exclusive source.

On the other end of the scale, stands the gaze of the subject, the artist, who looks at the landscapes of the country in the present and is mainly concerned with raising questions regarding time and place. The encounter between these two perspectives seeks to dissolve the boundaries between politics and space, between different truths, and creates new landscapes through practices of imaginary geography that expands over the landscape its familiar connections.

My artistic process began with selecting photographs from the encyclopedia, mostly pristine landscapes. I disassemble and reassemble the landscapes while adding various details that I documented in my various journeys in the landscape of Eretz Israel. Through these actions, I create a landscape that connects the public and the private, between collective and personal memory, between the real and the imaginary, and in doing so, maintains a visual journey diary that simultaneously presents the past, present and future.

In this exhibition I present a series of photographic collages created through a mix of digital and manual practices (laying out, folding, crumpling, cutting). I use playfulness and intuition alongside a disassembly/reassembly strategy to combine images from the encyclopedia with various objects collected during my travels.

The second part of the project will be presented at the Jerusalem Print Workshop in the framework of the Alima Prize for Printmaking. I will display a series of engravings based on the same photos as my starting point, but using different techniques to create them: photographic transfers, color separations, burning and abrasion of the plates.

Through the photographic procedure, images and objects are merged into a new picture of reality which creates a dialogue between different aspects of the encyclopedia. By mixing a variety of territories and landscapes, the image develops a new geography with its own boundaries and order. This new geography reflects the fluidity of borders and the ways in which climate change influences the geology of places and spaces.