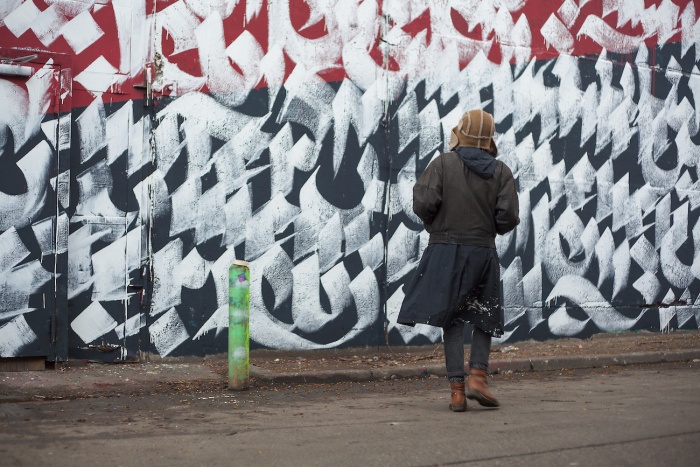 Photo Credit: Lea Fabrikant
Among Refugees Generation Y is a series of multilingual calligraphy murals created by Ella Ponizovsky Bergelson in the public space of Berlin. This project is based on the story “Among Refugees” (1923) by the writer, David Bergelson, who lived and worked in Berlin in the 1920s. We are proud to have helped support this project through our Small Grants Program.
Human nature tends to demand cultural uniformity and unequivocal self-definition. However, many cultural identities are more complex. Given political shifts around the world, and the reality of globalisation, a unified identity is increasingly rare. It is actually fluid, flexible and multifaceted. Language and typography are defining elements of a culture. By using a strict set of rules, they indicate the undisputed nature of it, both in content and visual form. This project aims to contradict the rigidity often ascribed to language, by using diverse typography styles in different languages, to create a hybrid outcome: the co-existence of multiple identities in a unified artwork.
I was born in Soviet Moscow in 1984, exactly 100 years after Bergelson’s (my great grandfather) birth, and immigrated to Israel in 1991. Growing up in Jerusalem, I was exposed to a vast diversity of cultures, religions and languages from a very young age. At the age of 22, I visited Berlin for the first time to trace my family’s roots –  they had lived there before the second World War. I returned to the city often after my visit, and eventually relocated to Berlin in 2016. From a young age, I have always had the inner awareness of cultural diversity that exists not only in communities but within individuals as well. I speak, read and write many languages. My own hybrid identity drives me to explore cultural self-definition in individuals and communities. In my work I explore manifestation of migration and integration processes through text and the visualisation of language.

Photo Credit: Hadas Tapouchi
David Bergelson (1884, Ukraine – 1952, Moscow) is considered to be one of the leading Yiddish writers of the twentieth century. He was already a well-known author when he relocated to Berlin in spring 1921, as part of a massive refugee wave that included many Yiddish authors, poets and scholars. In 1934 Bergelson was one of the last of his group to leave Berlin and relocate to Moscow. After two decades of fruitful artistic and political activity, Bergelson and his colleagues, during Stalin’s antisemitic campaign against the “Rootless Cosmopolitans”, where falsely charged with treason, due to their involvement in the “Jewish Anti-Fascist Committee”. After years of torture in prison, they were executed in 1952. This event was discovered by the public only years later and known as “The Night of The Murdered Poets”.
The story “Among Refugees”, originally written in Yiddish, offers a study of the different forms of existential crisis precipitated by exile. Under the visible narrative of a Jewish refugee residing across from a Ukrainian pogromist fantasizing about murdering him, lies the author’s projection of his own fears on the protagonist, namely of one day slipping from his hard-won status as a successful professional author to the level of a mad vagabond who invents stories that he foolishly believes to be useful to people. He thus metaphorically describes an artist’s fear of losing one’s culture and language.
“Writers, I thought, were the conscience of the nation. They are its nerves. They present their nation to the world. People read a writer’s works because they want to learn how the nation lived at his time. And so I’ve come to you. I’ve told you everything. And now that I’ve told you everything, you are responsible as I am and even more because you are a writer.” – Among Refugees (1923), translated by Joachim Neugroschel in “The Shadows of Berlin: The Berlin Stories of Dovid Bergelson” (San Francisco: City Lights Books, 2005)
Similarly to Bergelson’s story, the hybrid calligraphy murals are aspiring to integrate the inner conflict between an old identity and a new culture, the struggle for integration while preserving one’s cultural roots. At the core of the project lies the attempt of creating a symmetry between Weimar’s capital and contemporary Berlin as a creative production centre. Translating verses of the story into multiple languages (Yiddish, Arabic and German) is used as a tool to create a dialogue between different migrant and refugee communities in contemporary Berlin. This is depicted on a series of murals applied on public buildings that host local and international culture activities (such as Mensch Meier, ZK/U and Kindl Brauerei), visually integrating different languages to reach a harmonious visual manifestation of Berlin’s cultural hybridity. All the murals are temporary and will fade away after a few years, highlighting the sense of temporality faced by so many migrants.
“Among Refugees Generation Y” brings a rare documentation of Berlin’s history to the front light, forming a connection between past and present to reflect upon the future. The outcome is exposed to the public, making itself available to random passersby, therefore to a large and diverse crowd, bringing 100-year-old stories back to life, echoing with the present.