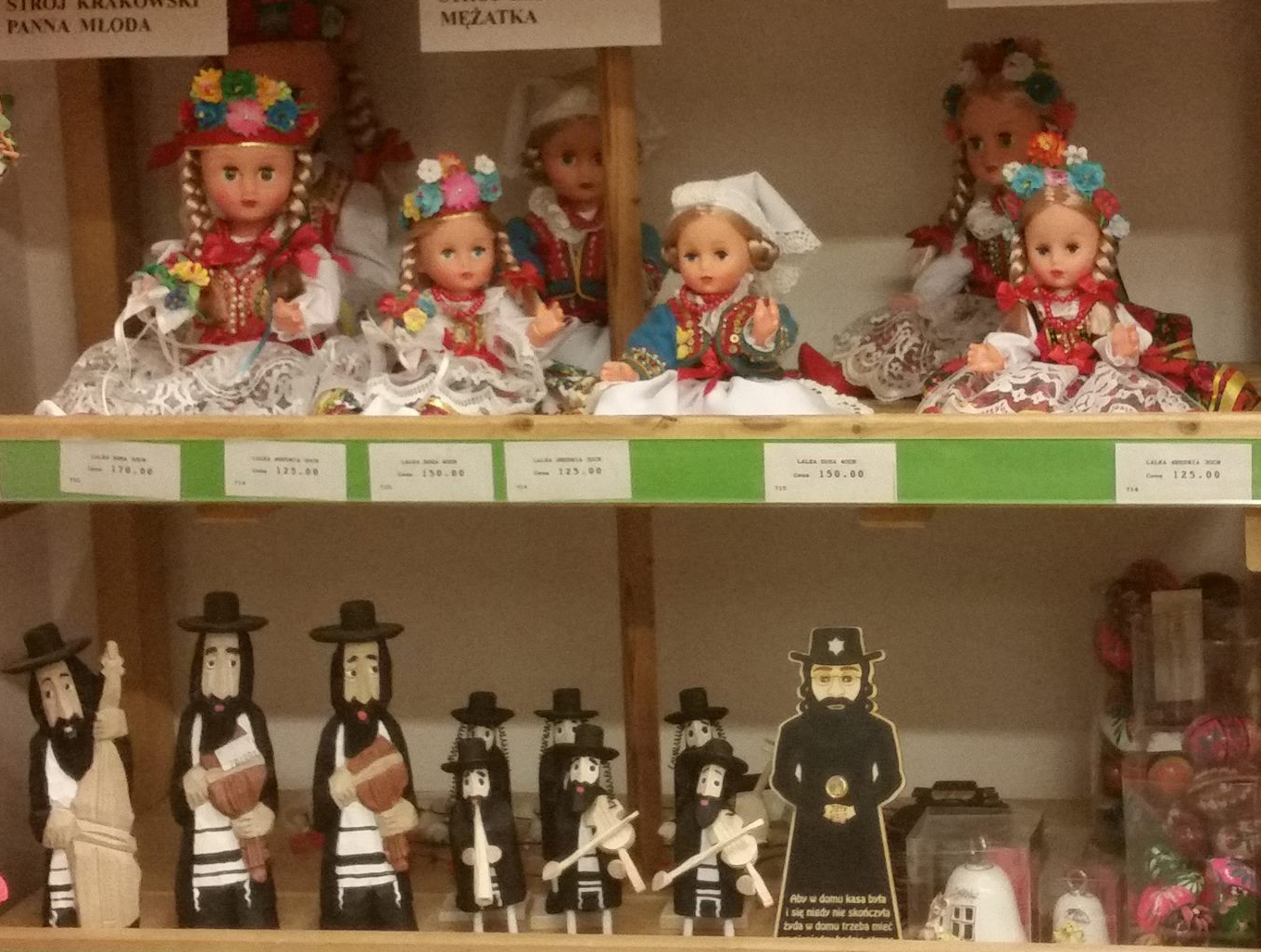 In this essay, Atalya Laufer shares her work process and the various contributions for her latest project – “Luck / O Lord” – a collaborative 4-hour musical exploration that was a part of the Lucky Jewathon Festival held in November as part of Festivalt. At the end of the essay, you can explore all the visual and musical contributions to the project.

The Lucky Jewathon was a 3-day / 72-hour interactive durational, online performance that aired on  November 26-28, 2020, by FESTIVALT.

Luck / O Lord was created in the framework of the Jewathon, a 72-hour online marathon discussing the issues arising from the so-called “Lucky Jews” of Poland. “Lucky Jews” are carved wooden figurines or paintings of (so-called) orthodox Jewish men. They are often depicted holding coins or counting coins. Seen by some as good luck charms, others see them only as anti-Semitic souvenirs. The Jewathon was the brainchild of a fellow Asylum alumnus Michael Rubenfeld.

For Luck / O Lord I chose a snapshot I had taken while in a store in Warsaw in 2017 contrasting these “Lucky Jews” on a bottom shelf with Polish female dolls in traditional garb on the upper shelf of a store. The photo had survived by chance only on Facebook. I then wrote a poem based on the image and sent both to my collaborators asking them to interpret the image and poem in any way they saw fit. I did not share my thoughts on the photo or the poem with them unless they asked.

My idea was to avoid an academic structure based on logic or stiff interpretations, but rather to tackle the themes arising directly with the artists’ contributions. In the context I saw them, to me the seemingly naive and traditional dolls at a tourist shop or a convenience store turn fierce and elicit intensive speculation. They allow a plethora of readings and points of view through the binary setting of female/male figures, young/old, traditional Poles/Jews, colours/black &white. My poem, which appears to be a monologue of a wooing lover, is actually a self-reflective conversation with other works. One of the references most people recognised was Leonard Cohen’s Hallelujah. His Hallelujah does not just weave biblical stories into a passionate love song, but it is also known for the many covers and different interpretations–including various verses out of the over 80 verses written originally. It seems to me to be a song that most people like and like to sing along to–even when the lyrics suddenly turn impossible to comprehend or problematic. Therefore, I thought it appropriate to invite various artists to cover my version of a strange love poem–a love-hate song based on anti-Semitic stereotypes that arise from a bad photo of some kitsch dolls in Warsaw!

Alex Stolze’s Gosh is a scrupulous yet scrumptious and evocative rendering of my text, effortlessly picking on most of its references, from the “Shma Israel” to Lou Reed & Nico to Topol & Tevye’s Fiddler on the Roof. Carlos Metta’s contribution with its bountiful instruments and rhythms from different parts of the world, like Brazil, Mexico, Indonesia and Hawaii, seems to express the idea that there could be an ethnical or cultural Jewishness. Ella Joy Meir’s work Luck is a hypnotic and very textural piece, revolving around sounds like luck and lucky (click-cluck, clock, lack, look, clunk). Manic at times, it attempts to dissect and reassemble the essence of what luck is and what it means to be lucky. Dan Wolf’s feisty Chosen for what? speaks directly from the shelf in the moments before and after being purchased and confronts the lasting effects of racism, war and trauma.

Sarit Shatzky has put the element of faith at the centre of her piece and created a seductive and bewildering experience of spirituality on the edge of survival. Anna Lowenstein has worked with a Klezmer tune that stands for a sociological phenomenon unique to the 19th century Polish Jewish experience. The music she chose is thought to have been widely used during humiliating ordeals in which Jews were forced to make a mockery of themselves, adopting grossly exaggerated caricatures of their traditions and cultural signifiers. Ben Osborn has played with the idea of mirroring and expanded the power relationships of my poem to a contested broader cultural meaning. The changes in perspectives allow for a heavy yet contemplative historical reproach. Sarah Gampel’s animation conveys her very personal connection to the “lucky Jew” figurines and Poland. An intimate telling, it shows how affection intertwines with alienation as well the complexity of coming to terms with the presence of the “Jewish Talisman” with its complex of cultural clashes, even in one’s own home. Kristy Kross’ contribution took us through the Scandinavian landscape and the Nordic folklore figure of the Nisse gnome all the way to a witty Karaoke singing of my poem to Kylie’s “You Should be so Lucky,” offering a serious nonsensical cultural clash. Carolyn Gammon skillfully and meticulously composed her earnest reference-filled song, developing it from one stanza to the next; what initially appears naïve and playful turns seductive and luring and eventually becomes a wind-up toy that has wound itself out. No longer a lingering love song but a denial of reality. Michaela Meise has chosen a 16th century Lutheran hymn for her contribution: “You must go towards him.” She has picked on the poem’s references to the symbolic figures of Ecclesia and Synagoga (“Church and Synagogue”) and their inherent anti-Judaism. In her candid angelical voice she seems to dust up history and asks it to look in the mirror.

Yuval Rapaport’s drawing takes on the joke about the Jew on a desert island who has built himself two synagogues. He questions the aim of the Jewathon in general and the necessity of such discussions surrounding the issue of anti-Semitism in which mainly Jews participate. He wonders whether we don’t have better or more interesting themes to argue about. Arian Abadi has created a compelling love song, weaving enigmatic statements in Spanish that take us through secret legends and spellbinding promises and paths. Arian brought the pagan world into the otherwise rather monotheistic discussion and raises questions about self-determination and fate. Hori Izhaki & Andy Simanowitz deconstruct the song and merge the contradicting perspectives into one–creating a sincere love song sung by a strong woman. My Minute Almighty gives voice to the stereotypical dolls that represent superficiality; it changes their role and gives them the power to transform. Persefoni Myrtsou suggests a story in which the lucky Jew actually gets lucky! While dehumanizing both characters through caricature, their short sexualized dialogue functions as an allegory of a highly complicated symbiotic relationship. Eliana Pliskin Jacobs’ Yidn af der gantser velt is steeped in offensive irony, as the narrative progresses through the perspective of a seductive philo-Semite turning into an angry anti-Semite. Peppered with the nasal voice of the “lucky Jew” throughout most of the song, the singer’s own voice eventually reclaims the chorus, laughing in the face of anti-Semitism. Ana Vallejo’s Lucky Goldy highlights the latent macabre kitsch in the figurines and questions the desire to own, collect and give meaning to them. She connects them with the idea of divinity–a lucky charm as a deposit of supernatural beliefs. Daniel Laufer & Alex Stolze offered a DJ set accompanied by live music, a potluck, a mixed bag of anything Jewish-y, from mainstream to insider, east and west, Ashkenazi and Mizrachi, new age, religious and trash.