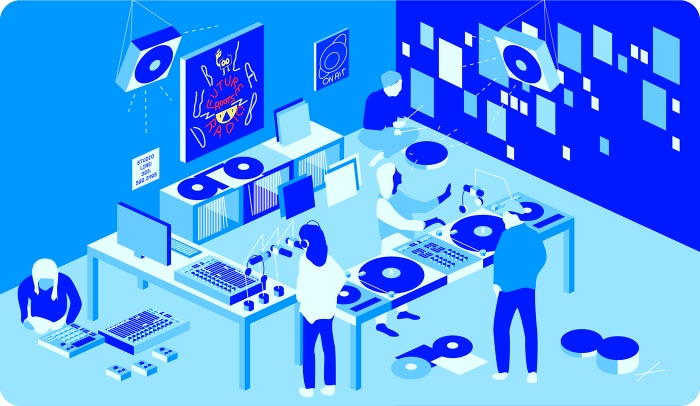 Photo Credit: Alejandro Cohen
Alejandro Cohen is a musician and a founding member of dublab, a non-profit radio station based in Los Angeles. dublab is a platform for discovery and the cultivation of next-wave music, arts and culture. In this article, Alejandro shares with us the process that led to the creation of a series of Interviews with Progressive Music Makers & Communities in the Tel-Aviv/Middle East North Africa region, and the unifying force music has.
Around late 2018 I was talking to a friend about the BDS movement and its impact in Israel’s music industry. I didn’t have a formed opinion on the subject, yet I did find it interesting in regards to the various degrees of support and opposition the movement had.  From there, I thought it would be interesting to have conversations with musicians and people involved with music in the MENA (Middle East and North Africa) region to explore what role music plays in their communities and if music serves as a unifying or dividing element among different populations.  After speaking to a wide variety of individuals from several countries and cities from the region, I got to understand that music plays a definitive role in sowing the seeds of unification among different cultures and nationalities. The underlying thread was one of seeing the world as one, where most of people have to navigate treacherous waters in order to stay safe, yet remain defiant to giving in to hate.
For the most part, I found that musicians from the MENA region accept the fighting and discrimination among countries as a sort of parallel reality that they are not part of, but they are affected by it.  While music provides a strong sense of identity, and pride to the people I interviewed, they also celebrate other cultures through their music, collaborations, and support of fellow musicians. The “Progressive Music Makers & Communities” series supported by Asylum Arts and the subsequent series “Louder Than the Noise” that was produced by dublab, both reflect a similar sentiment: parts of their communities may be driven by hate, but they themselves are not.  As I mentioned earlier, the interviews gave hope because as loud as music can be, it can also be a quiet catalyst for change, like planting a seed can be. The role of music in the MENA region has the potential to create empathy, understand one another, and amplify what people have in common. But above all, I found that music can be the healing force that can grow undetected and influence the next generation for the better. As they say: “Music is the universal language”
The series is available on on dublab.com and as a podcast: https://progressivemusictelaviv.simplecast.fm/
https://louderthanthenoise.simplecast.com/