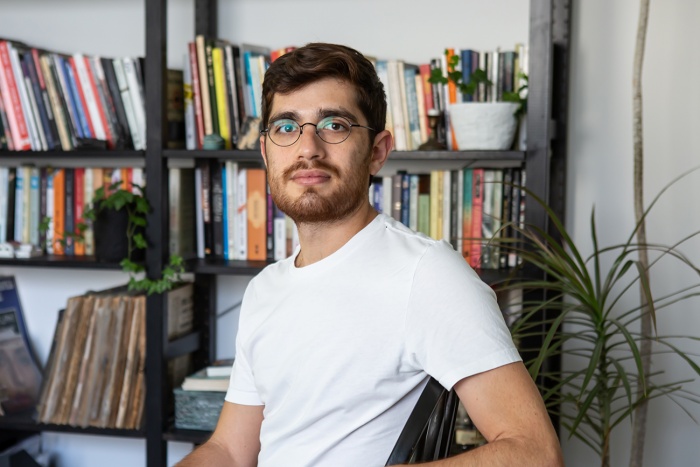 Photo Credit: Hila Ido
Asylum Alum Dor Zlekha Levy’s works are inspired by the history and the cultural heritage of Arab Jewry. In his latest exhibition, “Shomer,” which was held at Hamidrasha Gallery (Tel Aviv) in September 2019, he explored the gap between real-life experience and mere memory by reconstructing a synagogue in Beirut.
Following ‘Shomer’, a solo exhibition held at Hamidrasha Gallery (Tel Aviv), September 2019. Curator: Avi Lubin.
As a third-generation descendant of Jews who emigrated to Israel from Arab countries, the stories I grew up on occurred in places that I could not have visited myself. I used my imagination to explore the locations of my heritage clinging to fragments of memories that together painted a sweet, nostalgic picture. This picture did not correspond with images of these countries that appeared on television, having destroyed homes and blood-soaked war zones. My works, therefore, stem from the space between reality and memory, and the emotional frequencies of exile and longing. The understanding that the places that were recounted to me as a child no longer exist dissipates, replaced by the question of whether they existed at all.

My interest in the Magen Avraham Synagogue in Beirut began with a series of photographs taken in the building several years ago, which were later handed to me personally and immediately triggered my curiosity. Although the synagogue is located only a short drive from where I live, due to various circumstances it is impossible for me to visit the impressive structure in the flesh. For this reason, I replaced tangible wandering with virtual wandering during which I collected hundreds of photographs taken in the synagogue at different periods. The images reveal fragments of the synagogue’s complex history; from its founding in 1925, bombed by the IDF in 1982, the subsequent time during which it stood abandoned, and the preservation process it has undergone over the last few years. In addition to gathering visual materials, I interviewed people who had visited the synagogue over the years and who described to me their memories and experiences of the building.

From the archival materials I managed to collect, I constructed a layered projection installation that reassembles the synagogue’s spaces and reconstructs them in the gallery space. The viewers’ movement in the exhibition space activates and reveals different layers of the projection, presenting moments in the synagogue’s history. The exhibition spans two stories, and visitors are welcome to walk through it wearing wireless headphones listening to the exhibition soundtrack, which is an interview I conducted with a Lebanese-born Israeli, who recounts his memories of growing up in Beirut and later as an Israeli soldier who returned to the city during the war and revisited the synagogue. At two points in the exhibit, the sound coming through the earphones merges with the video works projected in the space. One of the videos, based primarily on photographs that I saw and the stories I heard, presents 3D renderings of the synagogue at different stages of construction and preservation. Drawings, plans, and architectural models were used to describe memories from the structure, and how those memories were preserved within the people who could not return.

In making this exhibition, I hoped the viewer could enter the gap that exists between an experience and its mere memory. The project as a whole is about the possibility of wandering around a place without really being there. The video documentation of the audience wandering through the exhibition is the record of my journey to the synagogue. Watching it in retrospect, I sense as if I myself was there.