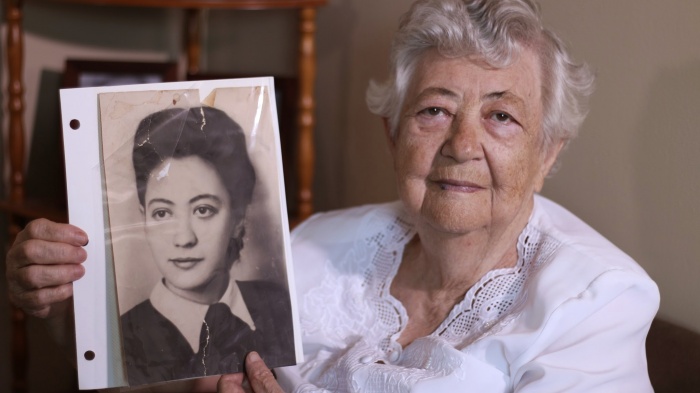 Photo Credit: Ilya Blokh
Ilya Blokh traces the journey from hearing his grandmother’s songs as a young child, first in Moscow, and later in the US, to his current efforts to preserve these songs and stories as they function as unique time capsules of our grandparent’s generation.
Ilya is inviting you to take part in music’s ability to reach across cultural and language barriers and to help create an online archive so such songs would be celebrated and not forgotten.
Ilya received an Asylum Arts’ Digital Creativity Grant to support this project.
“Sleep my child, grow up in this wide world
The years will pass quickly
Like a brave eagle into the bright sky
You will soon fly from your nest”
This is the song my grandmother sang to me every night in our Moscow apartment. This one and many others – songs about the war, old Russian “romances” and Soviet “patriotic songs”. Now dementia has taken all of the songs from her, though sometimes she will still hum along to an unknown melody that’s running through her head.
After moving to the US, my siblings and I would often ask our grandmother to sing for us and the songs would transport us: to the dark years of the war, when our grandmother would visit hospitals and sing to wounded soldiers, or to the more hopeful years when she, as a teacher, would take her class on camping trips and sing songs around the campfire.

Back in 2014, when my grandmother’s memory started to fade, I realized that I had to capture the songs before they were gone. I spent a few hours at her place, recording her singing and telling the stories behind the songs. That experience led me to the first version of the Songs of our Grandmothers project (funded by the COJECO BluePrint Fellowship).
I bought some basic equipment, taught myself to film and then lugged bags of tripods, light stands and cameras all around NYC, interviewing Russian-Jewish elders about the songs they remembered. At the end I made 4 short pieces (here, here, here and here). My vision was to keep going and film elders from many backgrounds, but I ran out of energy and time.

Cut to 6 years later. I was on a short trip to visit my parents in Alabama in March (I live in Berlin) and…well, you know what happened. Finally I had time and I felt an urgency, as COVID is particularly dangerous for elders. The new reality of social distancing, along technological improvements compared with 2014, encouraged me to rethink the project and so the new Songs of our Grandmothers was born. Instead of doing all of the filming (which is no longer possible), what if I could ask people to do the filming themselves?
I am now building an online archive of crowdsourced content – but instead of people lip syncing to pop music, I’m asking you to film elders in your life singing songs that may otherwise be forgotten. I invite you to talk with your parents, grandparents or elders in your communities and ask them what songs they remember and why, so that the songs can be preserved, celebrated and shared with the world.
Music is one of the strongest tools we have for reaching across cultural and language barriers – one can appreciate the beauty of a song without understanding the words. At a time when tensions are running high and people are retreating to the perceived safety of national identities, I hope this project can help bridge these divides in some small way.

The project is in its early days and I definitely need help with getting the word out. If you’re reading this, I would ask you: is there an elder in your life with whom you could connect and talk about music? And if not, is there someone else you could pass this onto? For me, speaking with my grandmother about songs and recording her singing was a profoundly meaningful and lasting experience and I want to encourage you to do the same.
You can find the main project here or follow on Youtube or Instragram.