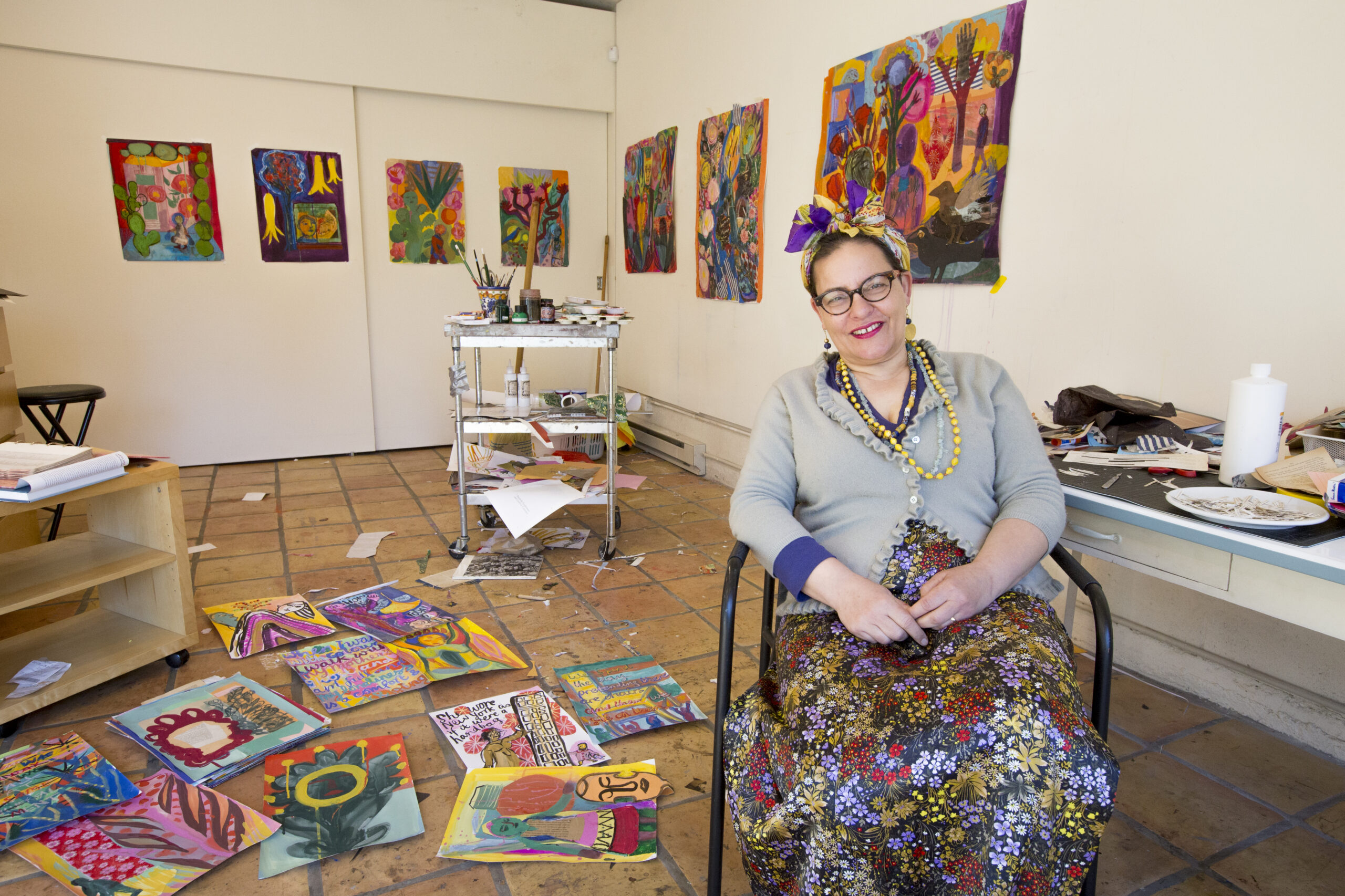 My whole time in Berkeley was nourishment as an artist. From root to branch, I needed that level of time to replenish. My soil was exhausted, and I needed a whole lot of sorting out and digging over.

Despite having been somewhat buried, I was very relieved to find that I was not dead.

During the first three months of the residency I discovered the monster of a library, raided the art shop, scampered in San Francisco, from City Lights to Relic Vintage. Mostly though, I was in the house on Prince Street, painting in ink and gouache every day for hours – trying to get onto paper the world I was seeing afresh in this place, away from projects, deadlines, commitments and my never-before-abandoned London. A new place! Where birds were process blue, Chanukah was as popular as Christmas, and winter lasted two weeks.

I loved the light and abundance of nature in the Bay Area. Now that I’m back in the UK I am trying to grow many more plants at home. I bought a little lemon tree and am aiming to convince it that we, too, have the sun. The colours of Berkeley: houses, flowers, birds, fruit… and the different vast scale, opened and transformed my painter-eyes.

There is an abundance of natural beauty here in the UK too of course, but I had become quite closed down to it because of the stress I was under raising a disabled and often violent child, as well as a mainstream one who needed just as much attention. During those intense domestic years I inhabited what felt like an unseen war zone and there was no time to admire a flower (although I admit I often admired the sky, for its indefatigable largesse!) The residency was the biggest break I’ve had from the demands of my family, and the first time I’ve had a sense of myself as somebody who wasn’t ‘wife and mother’ before ‘artist’ for a few decades.

The chance to develop further as a painter was perhaps the chief thrill of this residency. A luxury combination of time and space to myself at a time when I do have so much to say: experience gathered, inner and outer, and also many years worth of skills built up in my practice.

I liked working at night in the studio. Feelings and sensations were amplified by solitude and the novelty of the new surroundings.

I would stare and stare whilst out walking in the day: letting the colours soak into my mind and imagination, ochre walls draped in trumpet vines, house size cacti, purple houses with pink camellias, divergent typographies whispering and shouting in paint and neon from corners.

Initially I made about 30 smallish paintings in response to my displacement, the new environment, news from home.

Around the middle of the residency, in early spring, these really expanded, and as the pandemic restrictions began, I made some large paintings, focused on colour, nature, proliferation. Towards the end of the residency, in continuing lockdown, I made a series of about 20-30 observational close up flower paintings. (One of the larger paintings has been used by the Poetry Book Society here, as a cover image for its autumn bulletin.)

At a distance from my textile rich background, I found a new freedom to play with pattern. I let the paint itself dictate. The paint knows so much that I don’t. When I go along with its drive to spill, drip, splurge and fret the surface – I find myself nodding to the capacity it has to be properly complicated, like the tangled density of thought, of the world. It was also at this distance from my background in which flowers were revered and put into repeat, that I felt okay to paint the actual close-up glory and bizarreness of flowers.

Also working toward the observation and locking down of a moment, I offered to join in with the portrait project Portraits for NHS Heroes (NHS is Britain’s National Health Service), initiated by artist Tom Croft. Two nurses got in touch with me via Instagram, Alexandra Crisp and Lucy Quarman. Both wrote me warm and interesting emails describing their lives and the pandemic. They each spoke of exhaustion and the realities of confronting grief daily, of suspended family life, and also their passion for the NHS and for doing this important work with supportive colleagues. For centuries portraits have mainly been made to record ‘important’ people. With this project, key workers are seen and valued, each given the original artwork free of charge by the artist, as an appreciation of their contribution at this time. I drew Alexandra and Lucy from photos they sent. I used soft pastels and I put my best colors around their faces as added energy and protection.

Using similar materials, I also drew some portraits of the Gottesman Biddle family, including a couple in gouache. This was a perk of our Sunday Art Club, which became a regular event towards the end of the residency. A chance for us to all make things, spaced out but together outdoors in the yard, and a real up-side of the pandemic, that meant we had a chance to get to know each other.

In a poetry project running parallel and somewhat counter to the painting, I developed a collage poem series, cutting tiny phrases from broken and discarded books (many were found on the street, some came from the ‘little libraries’.) I spent many, many days trying to release these phrases from their tired old meanings, to tap dance free onto my pastel coloured index cards. Poets WN Herbert and Andy Jackson published one of my cut up poems re the pandemic each weekend, on their political poetry blog: New Boots and Pantisocracies, this time under the heading Postcards from Malthusia. In addition, the amazing poet Tom Jenks is going to publish 78 of them as a pack of prophetic cards, called INDEX, with his innovative press zimZalla, in spring 2021.

Writing is at least as important to me as painting, and although I found that the daily practice of painting had pushed some of my impulse for sustained poem writing to one side, I did write quite a lot of new poetry and as usual, plenty of notes.

I also made progress with a sequence that I began before I came to the USA. This is a collaboration with James Rolfe, a Canadian composer, also my first cousin. We are creating a song cycle on the theme of our shared ancestors: German Jews from Frankfurt, Mainz, Leipzig and Berlin, their twentieth-century experiences of life, war, exile. Some of them survived and many of them did not; we are conjuring their voices anyway. I have written five of the poems and he has created music for two of these so far. He played them to me over Skype in Berkeley, to my delight and astonishment. We have been given some funding (so far by the Canadian Arts Council) to develop this work.

Apart from the obvious ways in which the residency impacted me (like buying a lemon tree!) there are other ways in which California shows up daily in my current London life. It has dosed me with a kind of confidence as an artist and poet which infuses all the next things I’ve been taking on. For example for my last three commissions I’ve chosen to make colour absolutely central. I’ve also become more comfortable in myself – as an artist, a woman, a Jew, a mother – my constituent parts of which these are but a few – seem to be fighting less!