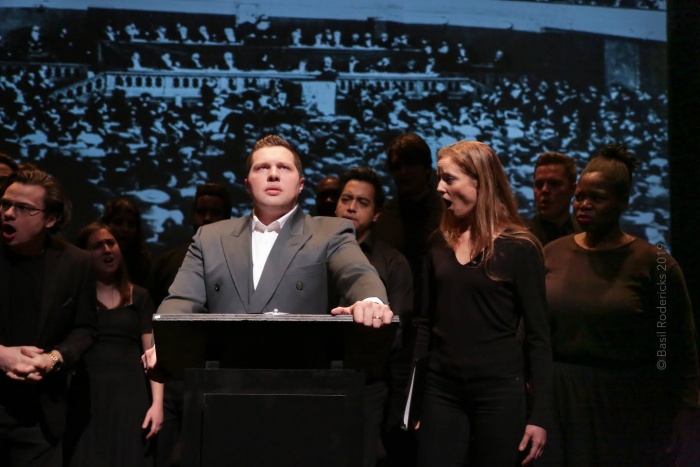 Asylum Alum Alex Weiser discusses his latest opera, State of the Jews, which was recently workshopped at the 14th Street Y in NYC.
For more than a year now I have been working with librettist Ben Kaplan on an opera about the founder of Modern Political Zionism, Theodor Herzl. We’re creating a work that is about politics, rather than a work of political art. Rather than serve any political agenda or ideology, our goal for the piece is to tell this charged, complex story with as much compassion for each of its characters as possible, while filling the work with as much nuance and historical detail as we can. As we have shared this work in workshop performances, including most recently as a part of the 14th Street Y’s LABA: A Laboratory for Jewish Culture, we have discovered that much of the history related to this story is not well understood. Here are a few examples:
Julie Herzl, Theodor’s Wife
While the Zionist movement and the general Jewish public may have thought of Julie Herzl as a supportive wife and model Zionist, in truth Julie had no interest in Zionism and in fact resented Theodor’s devotion to it. When Theodor died, he left Julie and their three children in a precarious financial situation, having spent much of their financial resources on his Zionist activities. The Zionist movement stepped in and created a fund to take care of the family, and Julie towed the party line in public.
Palestine or Bust
Nowadays the term Zionism is often associated with a kind of right-wing biblical push for a Jewish homeland in all of historic erets yisroel – “from the river to the sea.” In fact, Theodor Herzl’s seminal work, The Jewish State (Der Judenstaat, 1896) devotes a mere few paragraphs to the question of the location of a future Jewish state, and opens rather breezily, “Shall we choose Palestine or Argentine? We shall take what is given us, and what is selected by Jewish public opinion.” Late in Herzl’s life he briefly supported a plan to create a Jewish homeland in British-controlled East Africa.
Before The Holocaust
Antisemitism and antisemitic violence were immense issues which shaped Jewish history in Europe long before the Holocaust. Two pivotal moments in the story our opera tells are that of the Dreyfus Affair and the Kishinev Pogrom. The Dreyfus affair was a scandal which began in the 1890s in France in which a Jewish Captain was baselessly convicted of treason, laying bare a deep antisemitism in French society despite the supposedly emancipated position of Jews in French society after the French revolution. The Kishinev pogrom was a massacre in April 1903 in which dozens of Jews were murdered, hundreds of Jews were injured, and hundreds of Jewish homes were pillaged and destroyed.
Yekes and Ostjuden
The European Jewish community of the turn of the 20th century was far from uniform. Among a variety of interior divisions including religiosity and political views, were separate regional identities of Jews. For example, assimilated and acculturated Jews of Germany often looked at Eastern European Jews, “ostjuden” as they would call them, as lower class, brutish, dirty. On the flipside, German Jews were derogatorily called yekes in Yiddish, and often thought of as being uptight and out of touch with traditional Jewish sensibilities.
German / Hebrew / Yiddish
Theodor Herzl loved the German language and imagined that it would one day be the language of the State of the Jews. While Hebrew was known by some intellectuals as a scholarly and literary language, it was by-and-large not a living, spoken language, and was only first being revived into its modern spoken form as Herzl ignited the Zionist movement. In the meantime, the vast majority of Jews at the turn of the 20th century spoke Yiddish, a Germanic language written in Hebrew characters with around a fifth of its vocabulary coming from Hebrew/Aramaic, and many other words outside of its Germanic core coming from Slavic and Romance languages. Other Jews of the time spoke a variety of languages including Jewish languages like Ladino and Judeo-Arabic, particularly in the Middle East.
Religion and Zionism
At the 6th Zionist congress Herzl quoted Psalm 137 saying: Im eshkakhekh yerushalayim, tishkakh yemini – If I forget Jerusalem, let my right hand wither. It wasn’t uncommon for early Zionists to invoke ancient Jewish texts and religious ideas, but he, along with the vast majority of Zionists from that period were secular Jews. They turned to religious texts for a sense of national cohesion and prehistory, rather than for religious ritual.