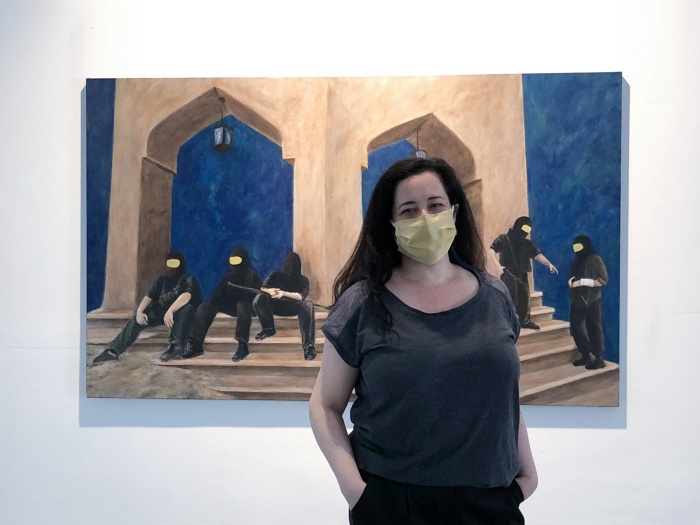 Photo Credit: Tali Tunik
Maya Shimony’s solo exhibition “The Department for Consciousness Operations” is on view at Tel Aviv Artists’ Studio, through July 18th, 2020. In the article, Maya reflects on her process of “Reverse engineering” possible visual origins of news media images as source material for her paintings, and on the power of painting to uncover the intersections of seemingly disparate or even rivaling cultures, ideologies, and ideas.

Time travel is usually imagined in very exhilarating terms, a dynamic leap backwards or forward through time. Enlisting metaphors of spatial travel, it normally involves a vehicle (be it a police box or a DeLorean) that careers towards a temporal destination at tremendous speed, overcoming the natural progression of time. Alternative techniques like tunnels and portals similarly require unbelievable energy in order to teleport, to “zap” from one time to another. What follows is often a nostalgic or futuristic encounter with a foreign land – a familiar place rendered completely strange and exotic by the distance of time. This introduction of an anachronistic element inevitably leads to a clash, as irreconcilable disparities begin to emerge, often in insidious ways. What it seems to boil down to is the impossibility of being outside one’s time.

At certain black swan events,* like the one through which we are currently living, something seems to happen to time: its usual flow is warped, slowed down, stands still, extends and stretches, progressing in jerky jumps. These events summon a different experience of being within time. And with it, something about the familiar ways in which our world is organized also unravels.

This disruption of time opens a crack in the thin veneer of “contemporariness.” Compressed layers of what we think of as history, obsolete history even, come hurtling to the surface, revealing they are in fact always there. All of the supposedly defunct, irrelevant, discarded ways of making sense of the world are very much a part of our present. Not in the sense of DNA, watered down as it is passed through generations, but as an overlapping, superimposed realities that are still with us. And how. (Needless to say, this also entails a geographic collapse: with the reordering of time, remote, adversary civilizations reveal themselves to be inextricably entwined).

In fact, this X-ray-like moment does not require cataclysmic, violent events. It can also be accessed through certain images. Images that feel “heavier” than others, condensing multiple meanings, significances, histories, until they become “black holes” of sorts. As though they are so heavy that they form their own gravitational field, affecting everything around them.

It is these sorts of images that I explore in my works.

The exhibition’s starting point was media coverage of Hamas’ takeover of Gaza from the Palestinian Authority in June 2007. Going into battle accompanied by photojournalists, the militants paused mid-battles to take perfectly staged photos, formulating a mythical narrative in real time. Curiously, all this was carried out using distinctly Western visual codes, seemingly at odds with the ideology of the organization. The exhibition brings to the foreground the possible origins of these codes – from Renaissance frescoes and paintings, through Persian miniatures, to European Orientalism – to question the supposed dichotomy between clashing worlds.

In the paintings, I bring together multiple temporalities and spatialities on the canvas. While at first they may seem of many times and outside of time, the paintings are always grounded in contemporary and my local reality. In a process of “reverse engineering,” I trace back their imagined origin, the visual language with which they were conceived, formulated, and disseminated. This brings to the surface the simultaneous presence of all these ideologies, meanings, values that continue to be at play in our world, even though they were declared dead a long time ago.

*The black swan theory or theory of black swan events is a metaphor that describes an event that comes as a surprise, has a major effect, and is often inappropriately rationalized after the fact with the benefit of hindsight.