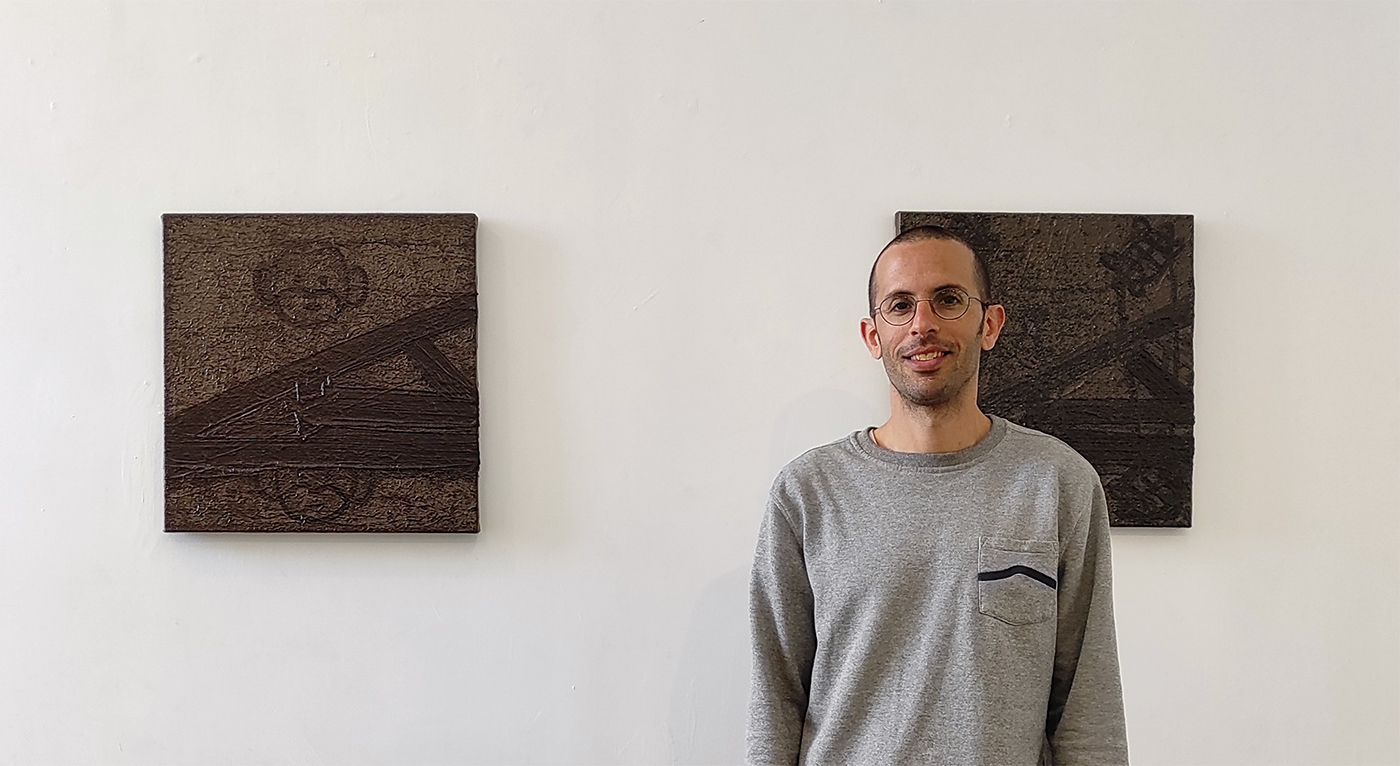 In this essay, Boaz Barkani shares how the Corona pandemic and a new boyfriend led to him reintroducing figuration into his abstract paintings. Boaz’s solo exhibition “The Last Turtle Shop, Story About Nature. Getting Used to the New Boyfriend” is now on view at Maya Gallery in Tel Aviv.

At the center of my work lies the desire to tell a story using the object of painting. This desire became clear during the first lock down we had in Israel due to the Corona pandemic. When it hit, I was working in the studio for a year and half on a series of abstract paintings. At the time, I was feeling grateful for the opportunity to study at Hamidrasha Faculty of the Arts at a young age and felt lucky that I’ve been continuously creating since then. But a concern started to creep in and I started to contemplate if I gave something up when I took upon myself the project of Abstract Painting. Up until that point, my abstract paintings were occupied and directly dealt with the qualities of the painting as the thing of and to itself, their existence was encapsulated by the canvas and the actions that created the marks on the canvas surface. A desire was re-awakening inside me to tell a story and I acknowledged once again my ability to create images and syntaxes with an emotional and narrative quality. I aspired anew for the work to fulfil an array of needs for me and for the viewer. I understood that I want to talk about the place I come from and to talk to the people who are closest to me.

The first series in the show is titled The Last Turtle Shop, Story About Nature. In it, I started to examine my own upbringing – both the landscape I grew up in and the ideologies that formed it. I grew up in Kibbutz Dalia, my dad is a kibbutznik and my mom came from an Iraqi family to live in the Kibbutz with him. Growing up there, I still question the meaning of the equality that was offered there as so many communities were and are still excluded from it. On the other hand, I still gravitate towards a close relationship with nature. These contradictions between nature and culture and the dependency of man on nature are what I explore in this series.

The images I work with, rabbits, birds, arms and fists all fit in their real size to the 50*46 cm format of canvases I work with. In previous works, my preoccupation with monochrome was a way to explore the relation between the foreground and background within the painting, and I’ve transitioned into working with the camouflage colors that exist in nature as well refer to the military culture in Israel. I was trying to go back to the subject matter I was painting before going to school (undergraduate studies at Hamidrasha). Painting that is located in the agricultural periphery where I grew up – a place that is full of destruction and a renewal of memory. As the imagery grew stronger so did my confidence in my ability to share and reveal this part of myself.

And then came along a new boyfriend, and so the second painting series of paintings Getting Used to the New Boyfriend began. In this series, I was trying to document and to give a first-person testimony about the things that were happening in the new relationship taking shape. To use the painting in order to understand things that are happening to me. I added monkeys to the imagery I was using as a way to represent me and my partner in a kind of otherness. To explore the gentle relations between man, nature, sexuality and their emotional landscape.

Working in series allows me to create continuity and play with nuances. I reengaged with influences from my childhood such as caricatures, comics and animation, where the faces of the characters express emotions and drama, reacting to what is  happening within the painting. Through them, I explore the destruction and compassion, violence and gentleness, pain and pleasure, connection and distinction that exists within me and in my surroundings.