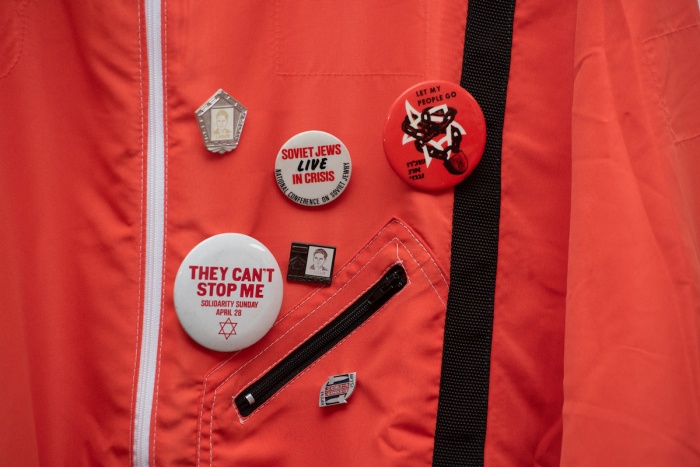 Yevgeniy Fiks talks about the opening of his latest exhibition, which premiered on May 16 in Moscow at The Center of Creative Industries “Fabrika” and was curated by Maria Veits (Creative Association of Curators TOK). This exhibition was proudly supported through Asylum’s Small Grants Program.
Yiddish Cosmos was my first solo show in Moscow since 2008, so it was a meaningful homecoming for me, and I was especially happy to return to Moscow with a Jewish/Yiddish-themed project. The exhibition was supported by Asylum Arts, Trust for Mutual Understanding, and Congress for Jewish Culture.
Yiddish Cosmos dissects seemingly unrelated stories: the intersected narratives of the Eastern-European Jewish experience, exploration of cosmos, and the Soviet space program. From these, Yiddish Cosmos forges one narrative of futurism based on ideas of universality, secularity, and scientific progress. The exhibition focuses on the interconnection of cosmos, cosmonautics, and Yiddish culture and includes as a point of departure three historical individuals: Volf Gordin, Ary Sternfeld, and Boris Volynov.

Volf Gordin (1889 – unknown) was a native Yiddish-speaking anarchist who in 1919 in Moscow developed the language of universal/cosmic communication and named it “AO.” The exhibition also talks about Yiddish-speaking Soviet scientist and pioneer in astronautics, Ary Sternfeld (1905-1980). Additionally, it includes the story of Soviet Jewish cosmonaut Boris Volynov(1934 – present), whose several scheduled space explorations were cancelled because of State-led anti-Semitism. It was only until 1969 and then again in 1976, when Volynov was able to go into space, which was the same time that Soviet Jewish “exodus” from the USSR was underway.

Mixing facts with fiction, Yiddish Cosmos narrates the Soviet Space Program from a Soviet Jewish perspective. This project speculates the idea that the cosmos became the homeland for Soviet Jews, and therefore, defines the Soviet Jewish narrative as one of longing for scientific progress and longing for a “homeland” that embraces them. The Soviet Jewish experience, therefore, is a continuation of exile, awaiting that green light to board a plane bound for the United States or Israel, or in this case, to board a space ship to reach their “homeland.”

Curator Maria Veits and I worked on contextualizing and reframing Yiddish Cosmos, specifically for the Moscow context, creating a special focus around post-war Soviet Jewish history, including the struggle of Soviet Jews with emigration – a story that is not well-known by the general Russian public today. To this end, as part of the exhibition, we created a timeline narrating parallel stories of the Soviet state’s space exploration program and the Soviet Jews’ struggle for emigration between 1948 and 1991.

In addition to the timeline, the exhibition includes works on paper, installations, archival materials, and a new video piece produced specifically for the Moscow show – an interview with Ari Shternfeld’s daughter, Ela Berman-Shternfeld. A remarkable part of the exhibition opening was a musical performance of Yiddish tunes with Olesya Rostovskaya on theremin, accompanied by Yulia Broido on piano. This produced a unique combination of traditional aesthetics with the theremin, the first electronic instrument invented in the 1920s.
The Moscow audience doesn’t know or remember much about Yiddish or Jewish culture and only people who are 45 years and older would perhaps recognize the name of Sholem Aleichem (Yiddish author and playwright). Also, an open Jewish identity in the sphere of Russian contemporary art is almost non-existent today, so it was especially meaningful for Maria and I to present an openly Jewish and unapologetically Yiddish exhibition in Moscow in 2019.
Yiddish Cosmos will be on display at CCI Fabrika through June 2
Exhibition hours: Tue-Su, 12 p.m. – 8 p.m. Free entrance