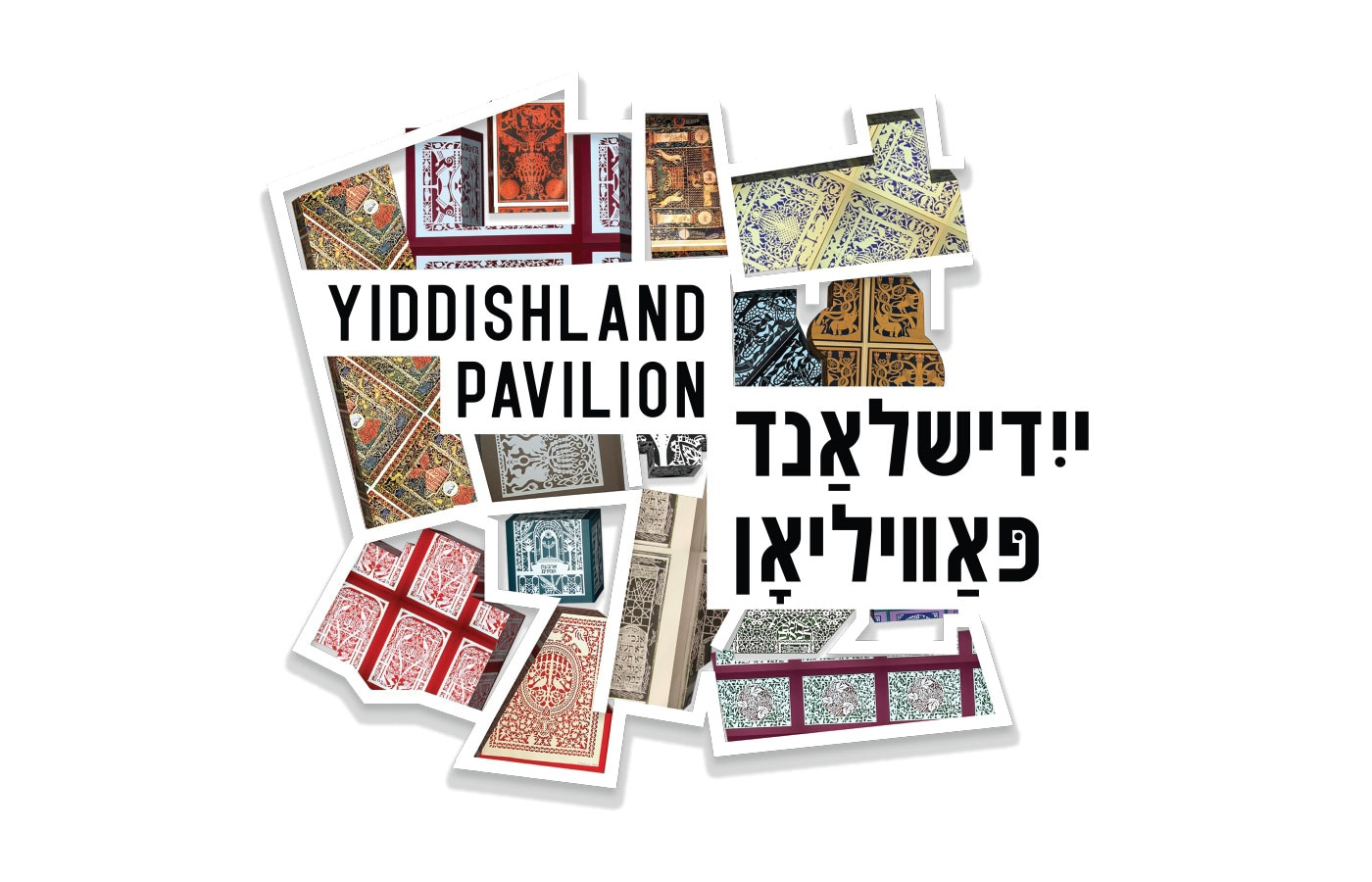 Supported by Asylum Arts, the First-ever Yiddishland Pavilion debuts at the 59th Venice Biennale featuring many Asylum alumni and curated by Asylum’s Yevgeniy Fiks and Maria Veits. By placing the Yiddishland Pavilion into the framework of the Venice Biennale and its system of the national pavilions, the project challenges the principle of national divisions within the biennale.

Yiddishland Pavilion will host Venice-based and online activities featuring artists and scholars between April 23 and November 27, 2022.

Launching at the 59th Venice Biennale, the Yiddishland Pavilion is the first independent transnational pavilion bringing together artists and scholars who activate Yiddish and the diasporic Jewish discourse in contemporary artistic practice. The Pavilion’s activities—performances, discussions, presentations of new artworks, physical and digital interventions—will unfold in Venice and online between April and November 2022.

The Yiddishland Pavilion takes place in dialogue and collaboration with the national pavilions of countries with histories of Yiddish-speaking Jewish migration. Being a fluid and nomadic project that is dispersed  between Venice and the virtual world, the Yiddishland Pavilion represents Yiddishland ( ייִדישלאַנד or  אידישלאַנד)—an imaginary country/land/space/territory and a stateless network connected through the Yiddish language and culture.

From its historical birthplace in the 12th century Jewish communities of Central and Eastern Europe, Yiddish language and culture have developed in close contact and cross-pollination with languages and cultures of their non-Jewish neighbors, while also experiencing violence and discrimination. The Holocaust, antisemitic state policies in the USSR, and assimilation caused the almost complete eradication of the Yiddish language in Eastern Europe. Through waves of Jewish migration from Central and Eastern Europe in the late 19th and through the 20th centuries, the enclaves of Yiddishland have expanded to Western Europe, the Americas, and beyond. The map of Yiddishland at the biennale spans the world from Lithuania, Ukraine, Hungary, Poland to Mexico, China, Japan and beyond.

Yiddishland Pavilion does not concentrate solely on Jewish-related issues: the project is cross-cultural and transnational. It highlights the necessity to stand in solidarity with those under attack and oppression while bringing into focus processes of dehumanization and displacement. The Yiddishland Pavilion analyzes the erosion of global political constellations, practices collective remembrance, condemns war and occupation, and documents consequences of migration and politics of exclusion that target otherness.

By placing the Yiddishland Pavilion into the framework of the Venice Biennale and the system of the national pavilions, the project challenges the principle of national division within the biennale. It forces the questions of national representation, selection, and inclusion in the art world into the political domain.  It also makes connections between different art scenes through shared Jewish and Yiddish history. While revisiting traumatic and difficult pasts of the 20th century, the project provides context and a critique of the continuing military aggression, imperialism, and colonialism practised by contemporary governments through wars, invasions of sovereign territories, and terror.

This year the Yiddishland Pavilion comprises a multidisciplinary online platform for presenting existing and new works, an audiowalk in the territory of the Venice Biennale that will connect different parts of Yiddishland through relevant national pavilions, and a series of public discussions, conversations, and performances, both online and offline.

Participating artists include many Asylum alumni:

Ella Ponizovsky Bergelson is collaborating with Anna Elena Torres to create the augmented reality project Pseudo–territory, inspired by the concept of  “Quasi-Territory” (כּמו-טעריטאָריע). The project is supported by an Asylum Arts Small Grant.

Hagar Cygler is presenting I Will Try To Draw a Sketch of the Property, As Best As I Can, But Please Do Not Laugh, a photographic essay using anonymous photos, imagining a connection to a forgotten apartment building on Lodz that is owned by her family.

Yevgeniy Fiks created Yonia Fain’s Map of Refugee Modernism, an  audio walk through the territory of the Venice Biennale (Giardini and Arsenale) that narrates the story of migrations, escapes, and creativity of the 20th century artist and Yiddish poet Yonia Fain (1913-2013).

Ofri Lapid is orchestrating The ‘Shund’ Reading Session, an online session that is scheduled for November 2022, and that will gather many Yiddish speakers for a public reading, thus reviving the subculture of the Yiddish play readings, and will focus on the glossary of censored materials.

Eduard Freudmann is a part of the SCHANDWACHE interdisciplinary artist collective. For their spatial installation, the artist group searches for a possibility to archive the graffiti permanently.

Nikolay Karabinovich is presenting Yarmulke of a Stretched String, a gesture of anthropological activism, a fake happening, a perverse practice that first emphasizes the voice and only then focuses on the object in the form of a figure reciting a political speech.